The following is an excerpt from Tom Ruggie’s newest book, “Ruggie Rules – for choosing and working with a financial advisor.” If you would like to learn how to obtain this excellent resource, click here. 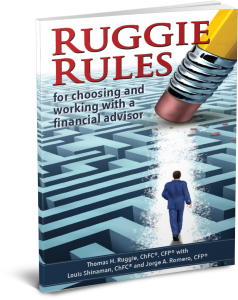 Why I Dislike Annuities – by Tom Ruggie

How you pay someone to give you advice or manage your investments speaks volumes about whether that advice best serves the advisor or you. If product sales are mixed with advice, the potential for conflicts of interest increases, and objectivity may be compromised.

Annuities have lots of bells and whistles that make them sound appealing to many investors, but when you truly evaluate these contracts, you find that most investors do not realize what they are giving up in the form of fees, lack of return, liquidity, or income design to get these benefits.

That’s only the start of why I dislike annuities. Annuities are cost-prohibitive, not easily understood, and oversold, especially to retirees.

A few examples of how annuities become expensive are shown below; it isn’t surprising for us to see annuities where most, if not all, of these apply.

For example, if you’re 70 years old with a contract worth $100,000 but an “income base” of $200,000 that will be paid out at 5% for life, you’d have to live 20 years to get that $200,000. Keep in mind that the first $100,000 is more or less your own money, so perhaps by the time you’re 90 years old, your annuity is actually working the way it should in theory. That’s not a good deal, regardless of the spin your advisor puts on it, and that doesn’t even account for what your funds could have done for you had they been invested differently over the same period of time.

Perhaps the biggest fallacy in annuity sales is that you can have your cake and eat it too, which is to say, your annuity contract can give you market-like returns without market-like risk. Yes, some index contracts can allow you to participate in some of the upside of an index, such as the S&P 500, but how much of that index are you likely to earn?

As mentioned before, with caps, participation rates, and spreads, even during a bull market like the one we saw between 2009 and 2015, many of these contracts barely reached 2% annual returns. To a risk-averse investor that may sound appealing, but would that same investor buy a 7-, 10-, or 15-year 2% bond? Common sense says this isn’t a reasonable rate of return for a period of time that long, yet this is the reality of some of these products.

That being said, in a few situations annuities could make sense, and there are “fee-based” annuities available, which lower the cost to the purchaser, thereby enhancing the ultimate return the client receives. However, because these don’t offer big paychecks for annuity salespeople, they’re hardly ever the products of choice, even when one would hypothetically make sense for a consumer.

Click here to learn more about “Ruggie Rules.” You can also give us a call at (352) 343-2700 to set up a consultation. We look forward to meeting you and answering any questions you might have.