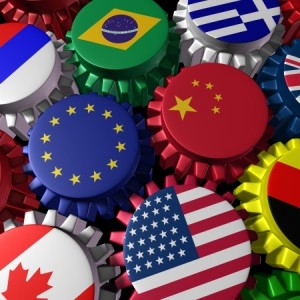 “The whiff of deflation is everywhere,” reported The Economist early in 2015:

“Even in America, Britain, and Canada – all growing at more than 2 percent – inflation is well below target. Prices are cooling in the east with Chinese inflation a meager 0.8 percent. Japan’s 2.4 percent rate is set to evaporate as it slips back into deflation; Thailand is already there. But it is the euro zone that is most striking. Its inflationary past – price rises averaged 11 percent a year in Italy and 20 percent in Greece in the 1980s – is a distant memory. Today, 15 of the area’s 19 members are in deflation; the highest inflation rate, in Austria, is just 1 percent.”

Low energy prices contributed to persistently low levels of inflation in many countries, although oil prices were slightly higher toward the end of the first quarter.

In mid-January, anticipating the European Central Bank (ECB) was about to try to head off deflation with a round of quantitative easing (QE) that would reduce the value of the euro, the Swiss National Bank (SNB) announced it would no longer cap the value of the Swiss franc at 1.2 per euro. The response was exceptional and unexpected. Experts speculated the SNB planned for the franc to lose value against the euro. Instead, it gained more than 30 percent. The Swiss market lost about 10 percent of its value on the news, and U.S. markets slumped, too.

The ECB commits to a new round of QE

The SNB may have miscalculated the effect of de-capping its currency, but it was correct about the ECB and QE. After months of dithering and debate, the ECB announced it was committed to a new round of QE and would spend about $70 billion a month through September 2016. Global markets cheered. Stock markets in Europe ascended to a seven-year high. The euro descended to an 11-year low.

Divergent monetary policy – the Federal Reserve ended a round of QE just before the Bank of Japan and the ECB introduced new rounds of QE – proved to be a pressure cooker for currencies. With the dollar rising and the euro falling, countries with currency pegs were forced to follow suit. U.S. dollar-linked countries generally tightened monetary policy, even if it might hurt their economies, and euro-linked countries pursued looser monetary policy. The Economist reported that, “Denmark has had to cut interest rates three times, further and further into negative territory, in order to discourage capital inflows that were threatening its peg against the euro.”

Thanks to quantitative easing, lots of banks in the United States and Europe have a lot of cash tucked away in their central banks’ coffers. The Economist reported:

“…negative interest rates have arrived in several countries, in response to the growing threat of deflation… Banks, in effect, must pay for the privilege of depositing their cash with the central bank. Some, in turn, are making customers pay to deposit cash with them. Central banks’ intention is to spur banks to use “idle” cash balances, boosting lending, as well as to weaken the local currency by making it unattractive to hold. Both effects, they hope, will raise growth and inflation.”

In the Euro area, Germany, Denmark, Sweden, Switzerland, the Netherlands, France, Belgium, Finland, and Austria have issued bonds with negative yields. Why would anyone be willing to pay to invest in bonds? The Wall Street Journal suggested one possibility: Investors think yields have further to fall.